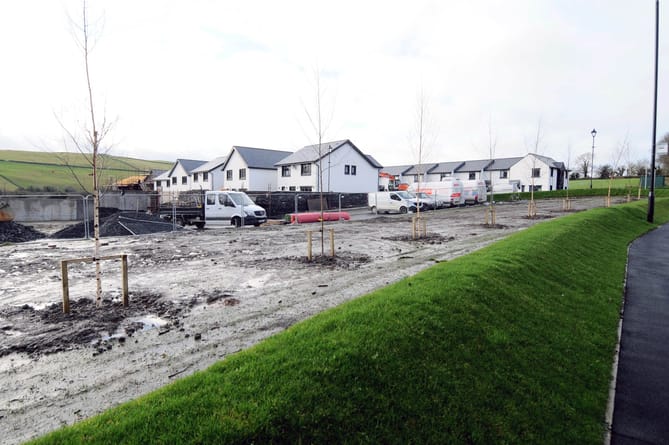 Residents in Marown would be entitled to compensation if they lived in other jurisdictions, thanks to a mistake in the Area Plan for the East.

Tynwald Commissioner for Administration Angela Main Thompson has investigated a mistake in the plan after a complaint from a resident.

Designed to zone land in the east of the island, the draft area plan was first published in 2018. This was followed by two years of public consultation, public hearings and a Tynwald debate before being adopted in 2020.

However, in the same period work was begun on a development, Crosby Meadows, consisting of 28 houses and retail units.

The field next to Crosby Meadows, heading towards Peel from the Douglas side, was removed from the plan as a strategic reserve in February 2020 as there was no perceived need for extra housing in that area.

However, there was no change to the boundary of the development area. At some point between then and June 10, 2020, a change was made and the boundary was extended. The change was either not identified or not corrected by the Cabinet Office, which was responsible for the plan.

Unaware of this, the complainant, who is identified as Mrs I, bought a house in Crosby Meadows, completing in December 2020.

Ms Main Thompson said: ‘Work on the Eastern Area Plan was completed during summer 2020 and was adopted on September 21, 2020, before being approved by Tynwald on November 18, 2020.

‘At the time the plan was approved no-one in the Cabinet Office with responsibility for the plan, nor the MHKs for the constituency, nor the Marown Commissioners had noticed what has since been described as a “cartographical error” resulting in the expansion of the developmental area for which permission to develop 28 houses had been given. No application was made to the High Court to correct the plan.’

However, the developer did notice the fault in the area plan and on December 29 2020, applied to build a further four properties at Crosby Meadows.

That application was rejected in February 2021 as while it fell in an area for residential development, it was not clear how affordable housing, public open space, drainage and access would be provided.

Marown Commissioners also opposed it, on the grounds that it was not within the area designated by the area plan for development, saying it would ‘seem to make a mockery of the new plan if such exceptions are permitted so soon after adoption’.

Ms Main Thompson said: ‘This suggests that the commissioners had not examined the plan approved by Tynwald and were unaware of any change.’

The developer appealed against that decision and it was during that appeal that the planning inspector discovered the issue and observed it was the result of a ‘cartographical error’.

As the period to appeal the APE had expired, there was no reason for the inspector not to treat it as a valid plan, as approved by Tynwald, with the site designated for residential use, therefore the appeal was successful.

By now the error had become obvious to the inspector, Marown Commissioners, MHKs and the Cabinet Office, but as the time to appeal had lapsed, nothing could be done.

Ms Main Thompson said: ‘This investigation should have been straightforward, given that the Cabinet Office in its letter to Mrs [Jayne] Poole-Wilson [MHK] had admitted that an error had been made but, as will become clear, it has proved less so and at the time this report was being drafted it was not possible to say with any certainty what went so seriously wrong in the process of preparing the plan.’

Mrs I met with Ms Main Thompson and explained that she had bought her house as she and her family were attracted by the open space and landscaping, as well as being close to her children’s school and offered a safe area for them.

Ms Main Thompson said: ‘The application for planning permission to build four properties to the west of the estate, which had been an area which was to be landscaped on the plan for the estate, was made three weeks after she had completed the purchase.

‘She did not observe that the required notices had been put up but, in any event, could do nothing, being prevented by a condition of her purchase from objecting to any further development.

‘Permission to build the additional houses was finally granted on appeal on September 8, 2021, but at the time of the interview serious work on the houses had not begun.’

It was also observed that with further construction planned, the Department of Infrastructure would not adopt the estate’s roads and that a number of snagging issues remained and that ‘more seriously, sewerage problems for which the Manx Utilities Authority did not accept responsibility’.

During her investigation, Ms Main Thompson grew increasingly concerned about how these issues had been handled, so wrote to the interim chief executive officer of the DoI to find out what discussions had taken place between the department and the Cabinet Office.

She said: ‘Her response surprised me.

‘She told me that neither she, nor the director of highway services, the division in which the cartographer is based, were aware of any issue in respect of the Marown map for the Eastern Area Plan. There was no contact at director level before the letter was sent to Mrs Poole-Wilson and Mrs [Alison] Lynch [the chairman of Marown Commissioners].

‘At the time in July 2021, Nick Black was the chief executive and a search was made of his inbox which revealed no communication on the subject.

‘It was possible that he had been told something orally in the margins of other meetings, although, from my dealings with Mr Black, I think it unlikely that on receipt of such information he would not have made further enquiries within the DoI.’

While Ms Main Thompson said it simply wasn’t possible to just withdraw the Area Plan for the East, especially since it was accepted by Tynwald, despite the errors made by the government, she recommended that legislation is needed to prevent the issue being repeated, particularly with work for the Area Plan for the North and West currently underway.

She said: ‘I am not confident that the additional safeguards, which I am told are now in place, will prevent a similar situation arising in the future.’

She added: ‘Since there was little prospect of the proposed legislation receiving Royal Assent by December 2023, the Area Plans for the North and West would, if approved by Tynwald, come into effect without the ability to correct mistakes. That was unsatisfactory and a risk. For that reason, I sought a mechanism which might reduce the risk, but none seemed feasible in the short-term.

‘However, I now understand that on December 6, 2022, the Cabinet Office confirmed that it was going to pursue a short Bill to overcome the problem. While that cannot correct the error on the Marown map, it may provide a means of rectification to any errors on the Area Plans for North and West.’

Ms Main Thompson concluded by saying that if Mrs I lived in a different jurisdiction, she would be recommending compensation be paid for the mistakes the government made, but as there is no provision for this on the island, she is unable to do so.