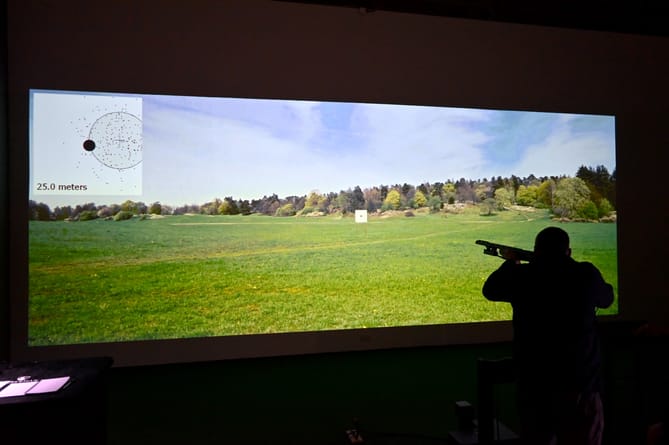 ‘Screenshot’ uses simulator technology, which is used on one of the largest indoor screen layouts in Europe.

Computer-generated targets are projected onto the screens, and the camera on the gun records the shot position when the gun is fired.

The shot position is relayed back to the computer to determine the quality of the hit, or the miss.

Free use of the range has been offered to the island’s cadet forces, ‘in the hope that future shooting talent can be unearthed’.

The simulator uses a 3-D gyroscopic camera sensor attached to the gun barrel, and has an accuracy of 1cm over 100m.

The island’s new facility, based at a unit in Tromode industrial estate, was opened by Lieutenant Governor Sir John Lorimer. It gives participants the opportunity to choose their own shooting scenarios and replay shots for training purposes.

Most clay target disciplines are available, and there are two screens: a vertical screen for clays, game and moving rifle targets, and an angled overhead screen for overhead targets.

The ability to replay shots and analyse performance data allows shooters to train and improve their shooting.

‘The indoor screen means you can shoot all year round, whilst the analytics and ability to replay shots will help with your training.

‘We are already seeing people who haven’t shot before choosing to spend hours on the range before going on to firing live ammunition at ranges elsewhere.

‘I have high hopes that Screenshot will soon discover the island’s next great shooting talent.’

Technology in use at Screenshot allows shooters to use their own gun or the dummy range guns, based on personal preference.

It allows for both shotgun and rifle shooting, with participants able to select their own virtual ammunition, environment and target.

There is also a clubhouse facility with refreshments.