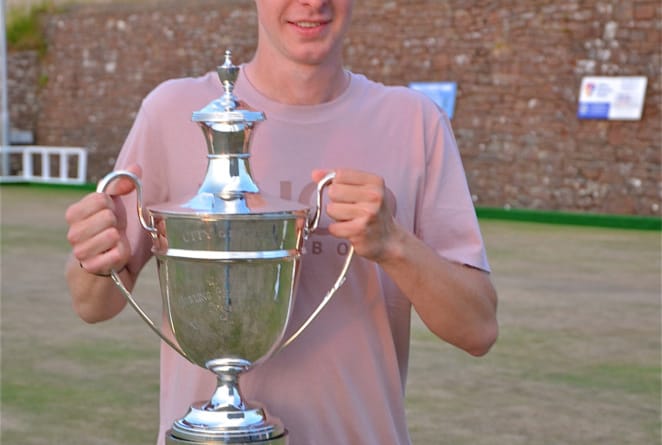 The green was in fantastic condition with a smooth and tricky surface to add to the hottest day of the year so far.

With handicaps ranging from +3 to +9, it made for an interesting day with some shock results. There were a number of high-profile casualties early on with some excellent ties.

Losing out at the quarter-final stage were Glynn Hargraves (South Ramsey) who lost out 18-21 to Nathan Hamilton (Castletown), home greener Dave ’Barney’ Kelly was heavily defeated 8-21 by Dean Kinley (Castletown, while Allan Kennaugh (Onchan) fought back from a 15-20 deficit before losing out 20-21 to Stefan Kelly (South Ramsey).

Stuart and Keith ‘Rise’ to the occasion in Howland Pairs

Tommy McMeiken (Peel) performed well to end the challenge of Neil Withers (Marown) to book his place in the semi-final.

Incredibly by the semi-finals, there was not only going to be a new name on the trophy but also a first-time men’s singles open winner, with Stefan Kelly’s previous success a few years ago being a mixed singles in the Thurlwell Bowl.

Kelly had a tough battle with McMeiken before eventually getting over the line 21-18. In the other semi, the two Castletown men also had a close game with Kinley building up a good lead before eventually winning 21-17 against team-mate Hamilton to reach his first final.

The final was both players’ sixth game of the day, with Kinley (+5) only having a slight start on Kelly (+6). It was the latter who made a good start to lead 9-6 after three ends, before Kinley took four of the next five ends to lead 12-10.

Kelly responded with three singles to lead 13-12. Kinley was playing well as he took three ends in a row to once again take the lead at 16-13.

The rest of the game was tense with both players scoring singles all the way as Kinley took three of the next four ends to lead 19-17, therefore he was only one end away from his first open title and was lying game only for Kelly to bowl a winner.

On the next end, Kelly forfeited the jack as a result of not playing his jack far enough but despite this he won the end on a measure along the seaside edge with a good second bowl. Kelly headed for the crown, as he had enjoyed good success playing these marks throughout the day. Once again a great second bowl won the end for Kelly to go 20-19 ahead.

On the final end, Kelly put up a superb lead which Kinley attacked with his first bowl and narrowly missed.

Kelly played his second bowl short and in the way to protect his bowl. Kinley once again played a reaching bowl this time on the round peg and took the bowl out cleanly, but with both his own bowl and Kelly’s bowl going off the green it meant Kelly’s short bowl was the one that counted to secure his first men’s singles competition title and the £160 first prize.

Kelly only scored one double throughout the final, with Kinley scoring three doubles proving how well-contested the game was.

Kelly proved to be a popular winner and showed great composure and maturity all day.

At the conclusion of play, the presentation was made by competition secretary Dave ’Barney’ Kelly who thanked the sponsor Isle of Man Seafood Products for its support.

Club chairman Dougie Allan was then introduced to present the prizes, and he thanked the team who work on the green for what made an interesting day of bowling and the club members for assisting throughout the day.