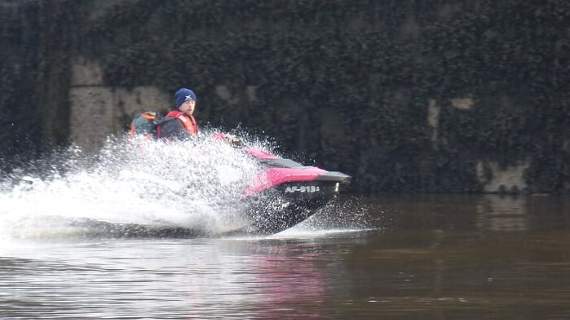 This is the moment a lovesick roofer from Scotland arrived in the island by jet ski - to see his girlfriend.

Firefighters use 70,000 litres of water to put out field fires

Dale McLaughlan, 28, has been jailed for four weeks for breaching the island’s emergency powers Covid regulations.

These pictures were taken by Noel Corlett as the jet skier arrived in Ramsey harbour on Friday. He is sporting a hat with the Scottish flag and a backpack.McLaughlan had purchased the jet ski the day before and then towed it 70 miles from his home in Irvine, North Ayrshire, to a beach on the Isle of Whithorn.At 8am on Friday he set off on the treacherous journey across the Irish Sea.He had expected it to take 40 minutes.But due to bad weather it took him four and a half hours.A police source told iomtoday that the jet skier had just 10 minutes of fuel left in his tank when he arrived.McLaughlan then walked from Ramsey to Douglas and called at his girlfriend's house in Cushag Road, Anagh Coar.She thought he was here lawfully for work purposes just as he had been on his first visit to the island in September.The couple went out the next evening to two nightspots in Douglas.McLaughlan was arrested the following evening.It is understood he has tested negative for Covid.