Two new species of butterflies could colonise the Isle of Man 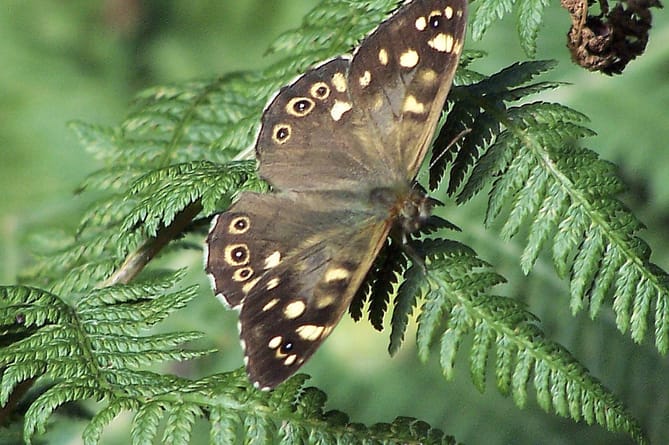 Two new butterfly species could be on the brink of colonising the island, writes Adrian Darbyshire.

And the emergence of the ringlet and brimstone is largely thanks to the efforts of Andreas butterfly man Garry Curtis.

They join two other species, the speckled wood and comma, which have only been added to the list of Manx fauna in the last decade or so.

The island currently has 16 resident butterflies plus three migrants that are regular visitors, the red admiral, painted lady and clouded yellow.

But for the past five years, a new species, the ringlet, has been present at a secret location in Andreas.

These insects originate from an escape from a captive breeding cage in Garry’s garden.

Garry has been interested in all forms of wildlife since childhood, and still has his school book from primary school in the 1960s in which he drew the life cycle of the small tortoiseshell, with all of it done by finding the eggs, caterpillars, chrysalises and adults in the wild.

‘I definitely had a leaning toward butterflies even then,’ he said.

He has captive-reared 47 of the 57 British resident butterfly species, gaining him an extensive knowledge of their various life stages – ova, larvae and pupae.

The escaped ringlets settled on a very small site in Andreas and have established a small colony which has existed unaided since 2017.

Last year several were seen just outside the perimeter of the site.

But while they could be on the brink of becoming a permanent resident, it maybe some time before they do so.

Garry said: ‘The colony has again had good numbers, for the size of the site, this year.

‘There has only been one sighting outside of the main colony – a male at Ballaghennie seen and photographed in July 2019.

‘Perhaps the biggest disappointment of 2022 so far is that, after last year’s hopeful signs, they don’t appear to have spread at all.

‘With it being confined to just the one small site I’d refrain from describing it as an established and permanent resident.

‘There is always the possibility that it has in fact spread and established on other sites and simply not been recognised.

‘What can be said though is that on the right sites it could exist here.’

In contrast, the arrival of brimstones, whose buttercup yellow wings are thought to be the origin of the word butterfly, is no accident.

Garry has continued a brimstone project initiated by the late Jerry Jones, founder of Manx Butterfly Conservation, which has seen the deliberate release of butterflies and pupae following the planting of their caterpillar food plant alder buckthorn at Ballakissack, Santon, as well as more recently at sites in the north of the island.

The species has bred in the wild this year.

But Garry said: ‘Again it is far too early to consider this species as resident. Hopefully in the not too distant future the incidence of proven breeding in the wild without any releases will be regular enough to do so.’

In the UK the clandestine release of native British butterflies, regionally or nationally endangered or extinct, by so-called ’introductionists’ has proved controversial.

Environmentalists say these secret releases mess up their data about the changing fortunes of species and conservation should instead be about protecting or creating habitats rather than bringing back species from the dead.

This hasn’t stopped their successful reintroduction across of the European sub-species of the large blue, which became extinct in the UK in 1979, and the chequered skipper, which disappeared as a breeding species in England in 1984.

Garry said: ‘There will be those who frown upon what I do in respect of captive breeding/rearing and would not wish to see brimstone or ringlet established here.

‘It can be a sensitive subject and some, particularly in Europe, would wish to see captive rearing banned altogether.’

Garry dismisses comparisons to the disastrous introduction of the grey squirrel to England or cane toad to Australia, pointing out how widely distributed the ringlet and brimstone are across Britain and Ireland.

The comma was another subject of deliberate reintroduction to the island in the 1980s, under Jerry Jones, alongside the marsh fritillary and duke of burgundy.

Unlike the latter two which never had a high chance of establishing here, the comma has really taken off and has now made the island its home, particularly in the north.

Indeed the species is viewed as a butterfly success story, having spread its range hundreds of miles north since the 1970s throughout England, Wales, southern and eastern Scotland – as well as the Isle of Man.

Another new Manx species, the speckled wood, was only first spotted in 2005 and has since then become widespread and is now one of the island’s commonest butterflies.

Unlike the brimstone and comma, the specked wood’s fortunes are not the result of deliberate human intervention.

The first colonisers could have flown across in favourable weather conditions from England.

But it is possible that they arrived here by accident, perhaps hitching a lift from the Lancashire coast on the Ben-my-Chree.

Garry said he had seen two speckled woods on the ferry when it was berthed at Heysham and ready to depart for Douglas. The berth is within a stone’s throw of Heysham nature reserve.

He said: ‘The means by which the speckled wood got here may never be known.

‘There are numerous ways in which it could have been introduced – through travelling via ferry, even inside a vehicle, as adult butterflies or arriving as eggs, caterpillars or pupae amongst imported plants.

‘It is almost certain that a significant number of insect species make the crossing every day. Most may well be native but no doubt some aren’t. ‘Perhaps harlequin ladybirds arrived this way too.

‘And there is always the possibility of a deliberate release that I don’t know of.

‘Personally I’m not that concerned with how it got here – just delighted that it is.’