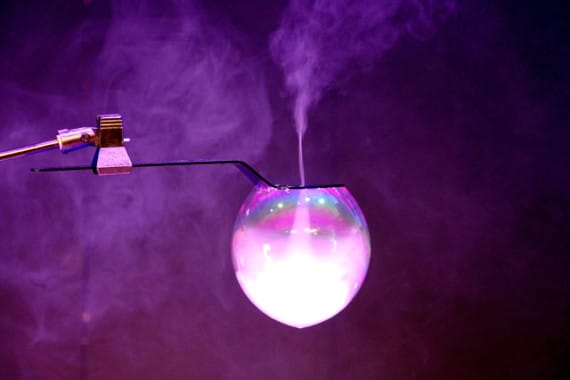 An amazing bubble show at the Studio theatre, Ballakermeen

Bubbles of all shapes and sizes filled the Studio Theatre at Ballakermeen High School, during a spectacular science show.

The bubble show was presented by the self-styled ’Super Sonic Science professor’, Hamid Rabani, who performed a range of tricks and stunts involving huge, floating bubbles.

Hamid, who works as a science teacher in Surrey, England, also involved children in the audience to help out, whilst engaging the kids and talking about the science behind the show.

Some of his tricks include creating a volcano bubble, producing a bubble filled with smoke, which one young volunteer was able to hold in his hand.

He also made a spectacular rainbow bubble that he was able to form over the heads of volunteer kids.

Hamid performs many informative bubble and science shows across the south of England, and creates his displays with the intention to make the science entertaining for children, and to get them to have fun while learning.

More than 280 people turned out to watch the two shows, which took place in the morning and afternoon on Sunday, August 4.

A collection after each show raised £82.76 for St Christopher’s.