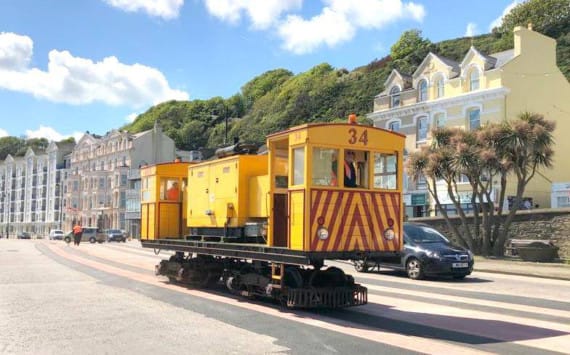 The space taken up by the newly relaid horse tram tracks on Douglas promenades is wider.

But transport chiefs insist this won’t reduce the width of the road, and the carriageway for traffic will actually be wider in places than it was before.

Some 1,000 metres of track have now been laid for the bay tramway.

This new track is capable of carrying Manx Electric Railway trams, or even a modern light rapid transport system at some point in the future.

The government believes that a modern tramway could play a role in meeting its target to cut the island’s carbon emissions.

A spokesman for the Department of Infrastructure said: ’The tram tracks are 300mm wider at the request of Isle of Man Transport, the position of the tracks is virtually as it was before.

’The roadway is 3.25 metres wide on either side of tracks as a "running lane", allowing 1.8 metres for parked vehicles. The carriageway is now a consistent 3.25m width along the route - previously it was as narrow as 2.8m in places.

’There shouldn’t be a need for vehicles to move onto the red (sienna) tram corridor.’

There was no planning application for the northern end of the promenade, with the DoI maintaining that, from a design point of view, it remains largely the same.

Tynwald approved a motion on the Douglas promenades reconstruction project in December 2016, which included the principle that the horse tramway rails should be laid in such a manner as to support a heritage or potential future light rail electric tramway system.

Infrastructure Minister Ray Harmer told the court at that time: ’The northern promenade would be constructed like-for-like, providing simplicity and a proven track record, as well as providing the potential use of an MER or a modern light tram, by connecting the trams at Strathallan.’

Trials of a diesel-powered MER works car took place on the horse tram track before a 500m stretch of the line opened for the 2019 season on May 24.

The DoI spokesman said running the MER on the line did not necessarily mean overhead wires would have to be installed along the promenade as ’other technologies exist’.

She said: ’The government has made it clear that the tramway would be laid to allow modern trams to operate in future, if that were required.

’Given that the weight of the rail is a small part of the total cost and that the rail was purchased at an advantageous price, it made sound financial sense to install a track that would suit a range of future scenarios.

’The DoI trialled an MER car that carries an on-board generator in the last few weeks before the line was reopened, to check that this type of operation was possible; other technologies exist that do not require the use of overhead wires.’

She added: ’Clearly, government would secure all required consents before committing to any new sort of operation.

’The type and route of any modern tramway would need very careful consideration but might in future have a part to play in rising to the climate challenges facing the island.’

Isle of Man Transport say there are many alternatives to overhead wire.

A conduit system as once used by London trams has been ruled out as ’inappropriate’ for a coastal tramway but other potential options include Lorain stud contact, Alimentation par le Sol (APS) ground-level power supply, nickel metal hydride batteries, a Mekarski compress air system, diesel generator and super capacitor.