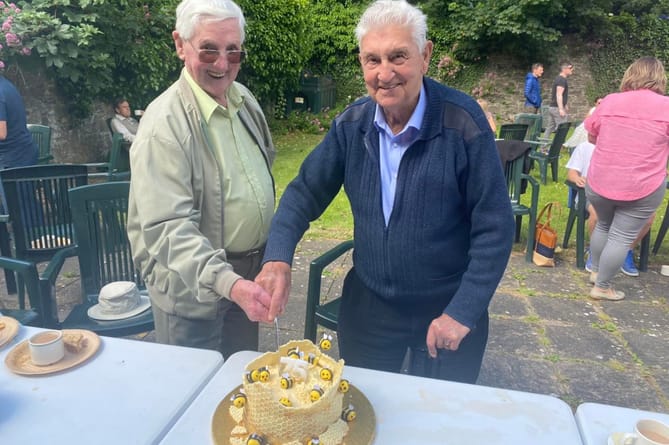 The Southern District Beekeepers Association has celebrated its 75th anniversary.

The group gathered at Rushen Abbey in Ballasalla to mark the occasion and the event saw a great turn out.

Around 40 people, including former group officers and secretaries and lots of long-time members turned up for the party in the sunshine.

The visit was facilitated by Manx National Heritage.

While visiting the Abbey, the association was given a ‘wonderful tour around the Rushen Abbey garden’ by Karen Griffiths.

This was followed by an afternoon tea, complete with an elaborate beehive cake made by Isle of Man Beekeepers Federation treasurer Linda Cain.

The cake was cut by two of the group’s most long-serving members, Norrie Mills and Jimmy Fisher.

Cilla Platt, chairperson of the group, said: ‘It was beautiful, the sun was shining all day.

‘It was a very friendly affair with a lots of sandwiches and cakes, out in a grassy courtyard.

‘We were lucky to have the weather on our side.’

The group thoroughly enjoyed the tour of the gardens in particular, and posted on social media to say: ‘It was a lovely afternoon – thanks to the committee for organising it all.’

Beekeeping in the Isle of Man has a firm following, largely because bees here are thankfully free of diseases like varroa which has wiped out so many in other parts of the world.

Local beekeepers – and the Manx government – would therefore like to keep it that way.

Only brand new hives and other equipment can be imported to the island, although you can buy secondhand hives from an island-based beekeeper.

It costs around £600 to buy hives and accessories including a protective suit with face mask.

A good hive, in a good year, will produce around 50lb of honey.

l You can find out more about beekeeping on the Isle of Man Beekeeping Federation website: www.iombeekeepers.com/