Unearthing history in the Manx hills

By A team of archaeologists have returned to the island to carry out excavations at a Bronze Age site. Reporter Siobhan Fletcher went along to find out more.
Wednesday 29th June 2022 5:32 am
Share 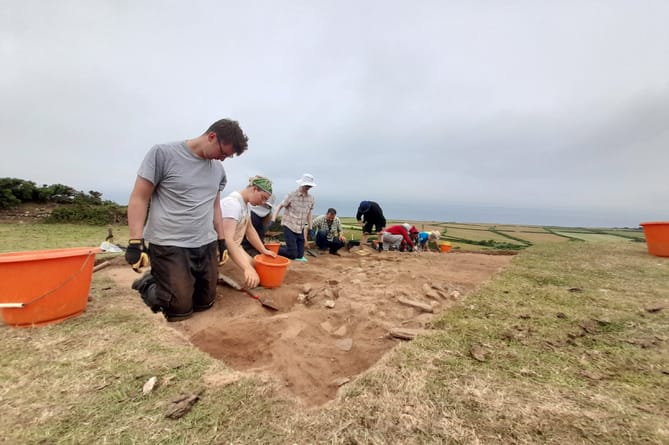 Up in the hills outside of Kirk Michael a team of archeologists are currently hard at work trying to uncover secrets from the past.

It is their fourth trip over to the site since 2017 - but they haven’t been able to come and excavate since 2019 as a result of the pandemic.

The team includes 21 archaeologists; including students from the Universities of Leicester and Newcastle and a range of local volunteers.

Led by Professor Chris Fowler, from Newcastle University, and Dr Rachel Crellin, the team are working in collaboration with Manx National Heritage who, alongside the universities, have helped to fund the dig.

Offender hid cannabis in his sock

The Steam Packet Company is supporting the visit by assisting with travel costs for the archaeologists and their vehicles and equipment.

The excavation is part of an ongoing project, launched in late 2016, to investigate the Isle of Man’s prehistoric burial mounds (earthen mounds built over human burial sites).

The Isle of Man is home to more than 160 round mounds but very few have been excavated using techniques that have left a detailed and reliable record.

Round mounds were built sporadically during the Neolithic and in large numbers during the Early Bronze Age.

The project is investigating what these sites and their associated burials and artefacts can tell us about life on the Isle of Man during these periods, but also about interaction with other communities across Britain, Ireland and potentially beyond, in the Neolithic and Bronze Age.

Rachel is an associate professor of archaeology at the University of Leicester’s School of Archaeology and Ancient History, and was born and raised here on the island.

I went up to the site of the dig to meet her and find out more. The first thing the team did is open up a trench for the group to begin to delve into.

As Rachel explains: ‘These trenches are brand new and the archeology is just beginning to pop out of the surface.

‘We dig layer by layer, recording every layer, so all the things that come out of it are kept together.

‘We’re up here for four weeks this time, and we are hoping to get finished.

And how does the changeable Manx weather affect a dig?

‘A bit of light rain is fine,’ Rachel laughs. ‘A really rainy day is not so good. It was incredibly windy on Sunday and it began to get quite difficult in that amount of wind - buckets were blowing places, people were getting blasted in the face, it was quite windy!’

This is not the first time that the team has excavated the site, in fact, it is their fourth trip to the island.

Rachel said: ‘We started excavating here in 2017, and we excavated in 2018 and 2019, and then obviously it’s been disrupted by the pandemic, and now we’re back.

‘So far we have found at least seven burials in the mound and we’re hoping to finish the project that we’ve started, so finish excavating the site this time around.

‘Maybe that will involve finding more burials, that’s part of our expectation.

‘Day-to-day we find things like flint and shards of pottery and charcoal and sometimes bits of human remains as well, and that helps us understand life and death in the Bronze Age.’

And what happens when a discovery is made?

‘All the finds are in the Manx Museum, and that’s where they are going to stay. We hope that eventually they’ll go on display – we’re working with Manx National Heritage, they part fund the dig and they have been with us from the beginning helping devise the project.

‘We will study all of the things that have come out of the site in a lot more depth to help us write it all up in the end.’

When they write up the findings of the dig, the team will be trying to reconstruct the history of the site.

As Rachel explained: ‘So we have aspects that are before the Bronze Age and then over the course of probably three, four, five hundred years, a series of burials are added to this site.

‘We are looking to reconstruct all of that process so it can help us understand what it was like to live and die in this period.’

In the previous digs at the site, the team has made several discoveries which are very exciting.

‘The most amazing find from 2019 was an absolutely beautiful jet necklace (pictured left).

‘So we call it a spacer-plate necklace. It’s multiple strands of beads that are separated by decorated flat discs and we’d love to see that on display in some way. It’s also got a matching bracelet. It is quite beautiful.

The team will be digging until Friday, July 15, and I will be checking back in with the team in a few weeks to find out what they discover this time around.