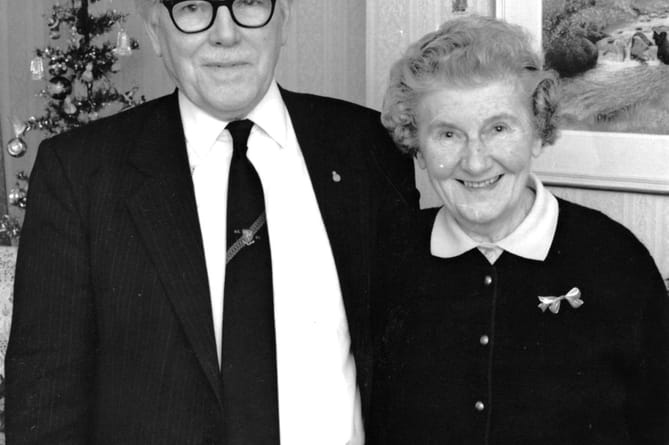 Victor Kneale was instrumental in education policy over an extended period.

He had been a member of the Education authority between 1951 and 1962 when he was elected to the House of Keys representing West Douglas serving until 1974.

He was elevated to the Legislative Council in 1974 to 1981 when he stood down to once again successfully seek the support of the people of West Douglas until 1991.

Stu Peters: Immigration should be controlled

Health and fitness: What's the best piece of advice you've been given?

He had previously been chair of the Post Office between 1972 and 1981 overseeing the island’s postal services becoming independent from the UK.

He was an accomplished artist and photographer and one of his greatest assets was his lovely wife Thelma who would accompany him whilst canvassing the electorate.

Matty Ward had a dry sense of humour and a twinkle in his eye.

He didn’t let those who felt self-important forget to whom they were responsible.

He was involved as Chair of the Forestry, Mines and Lands board where he is remembered with fondness. He was also chair of the Police Board and had a number of other positions.

His career before the Keys had been with Post Office engineering where he was a long-standing union official.

Noel Cringle was an Arbory Commissioner between 1964 and 1974 when he was elected in Rushen serving until 1986 when he lost his seat only to return to the Keys in 1991 serving the constituency until 2000.

He previously served as Minister of Education between 1995-1996. Noel was very single minded and a great orator having learnt his public speaking firstly via the Young Farmers organisation. A talented singer and very keen sportsman serving as Chair of the Year of Sport in 1985.

Norman Radcliffe was Noel’s brother in law,his Sister Mary being Noel’s wife, he served Ayre between 1976 and 1985. Before serving in the Legislative Council. He had previously served on Andreas Commissioners.

He was chair of the Highway and Transport Board between 1979-1982 and Board of Agriculture and Fisheries between 1982-1986 going on to serve in Treasury.

I always remember him as a typical Manx farmer with a friendly disposition but never to be underestimated for political nouse.

Best known for his various health service posts he served as Minister for Highways Ports and Properties as an MLC between 1986 and 1991.

It was during his time that the TT access road was put in place between Quarterbridge and Braddan Bridge.

He had served as an Onchan Commissioner between 1954 and 1976 being the board chair five times.

He was chair of the Executive Council, the forerunner of the Council of Ministers, between 1985 and 1986 and Minister for Education between 1996 and 1999.

A very talented, humane, thoughtful representative even in the face of physical adversity.

I really liked Willie Quirk. Another Manx country character he had served as a non-Tynwald member of the Board of Education between 1971-1976 and as a Patrick Commissioner.

Miles Walker was a member and past chair of Arbory Commissioners and served as MHK for Rushen between 1976 and 2001.

He was the island’s first Chief Minister between 1986 and 1996 during which time, in cooperation with both sides of industry, the economic success which was to follow was set in place.

There was also long overdue recognition of the need for social modernisation which commenced despite opposition from some quarters. I had the privilege of working as a Minister under Don Gelling twice, Richard Corkill, Allan Bell and Tony Brown for 18 years and remain a strong supporter of the Walker administration which, despite difficult times, laid strong foundations. He was knighted in 1997.

He had been the MLP member for North Douglas following the elevation of Alec Moore to the Legislative Council in 1978.

He was re-elected in the 1981 General Election.

After Arthur’s death Bernie May who had been a Councillor between 1980-1985 took the North Douglas seat which he held until 1996.

He was chair of the Post Office between 1986-1988, Minister for Industry between 1988-1991 and Minister for Health and Social Security between 1991-1996. Bernie was a very personable and capable MHK and remains a good friend.

He chaired Treasury between 1985-1986. He was the son of George Henry Moore who had been MHK for Peel.

Clare Christian was MHK for Ayre between 1980-1986 when the constituency changed from two to one seat.

She was elected as an MLC four times and served in that capacity between 1996 and 2004 as Minister for Health and Social Security.

Older daughter of Sir Charles Kerruish she made history on election as the first female President of Tynwald between 2011-2016.

Roger Payne was an Onchan Commissioner before being elected to the House of Keys for Middle.

David Martin was a town councillor between 1974-1981 before serving East Douglas.

Walter Gilbey was successful at his third attempt in Glenfaba which he served between 1982 and 2001 and was Minister of Local Government between 1999-2001.

Lionel Morrey was elected in a by-election in Ayre in 1985 then stood in Ramsey and Michael in subsequent elections without success.

David Cannan, father of present Chief Minister Alf, was unsuccessful in Ayre in 1981 but was elected in Michael six times.

l In the final part next week we will look at former Chief Ministers Tony Brown and Allan Bell together with Peter Karran and maybe even David Cretney!