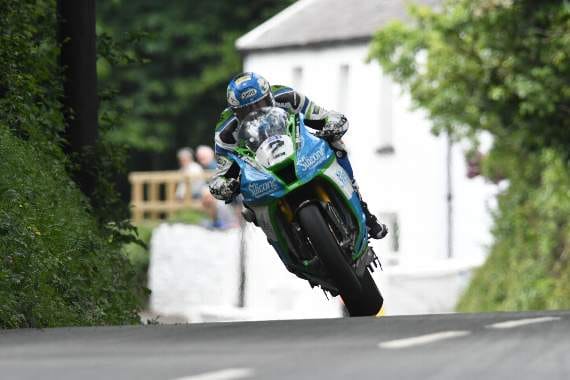 Dean Harrison clinched his first bike win in Friday's six-lap Senior TT race.--------------The final day of the 2019 TT is upon us, with the blue riband Senior Race getting underway shortly.

It’s been a challenging fortnight plagued by poor weather, but Thursday saw a record five races take place in a single day for the first time in history.

Peter Hickman has been the star of the meeting so far with three wins to his name - can he make it four today? Or will Dean Harrison claim his first win of the week?

You can never discount Michael Dunlop who wracked up his 19th TT win to date with victory in Thursday evening’s Lightweight.

Manxman Conor Cummins would be a hugely popular winner if he can grace the top step of the podium.

The Senior had been due to get underway at 10.30am but has been moved half an hour earlier 10am with heavy rain forecast for late morning.

Follow this page for all the latest updates from today’s race.

Don’t miss issue three of TT News which is now on sale priced only £2. It features all the action from both Supersport races, Sidecar race two which saw the Birchall brothers claim their seventh win in a row, the Superstock and TT Zero races, plus much much more.

3.30pm - Roads open (except Mountain) at the latest

4.30pm - all roads open---------------- Slight delay to the start of the Senior - it's now due away at 10.15am. The sunny skies at the Grandstand have now been replaced by some ominous clouds - it'll be a race against the weather today.- Lee Johnston a late withdrawal due to mechanical issues10.15am - Conor Cummins gets the 2019 Senior TT Race underway- Hickman leads Harrison by 0.351 seconds at Glen Helen on lap one. Conor Cummins third 5.6s- Harrison hits back to lead Hicky by 0.185s at Ballaugh- Hicky back in front by 0.118 at Ramsey and then increases lead slightly to 1.066s at the Bungalow- Hickman completes the opening lap at 134.28mph fron a standing start to lead Harrison by 2.2s. Cummins in third ahead of Dunlop- Harrison reduces Hickman's lead slightly to 1.841s at Glen Helen on lap two. Conor now 3s clear of Dunlop- Hicky increases lead to 3.4s over Harrison at Ramsey- Riders will pit at the end of this lap- Hicky with an 8s lead heading into the pits. He and Dunlop leave the pits together but, sportingly, the latter lets the leader ahead of him heading down Glencrutchery Road- Davo Johnson a retirement at Bedstead, moving Davey Todd up fifth- Hicky steadily increases his lead on lap three, 12.3 seconds clear of Harrison at the Bungalow. Conor now 15s ahead of Dunlop and looking good for a podium so far- Hickman further increases his lead over Harrison to 13.486s at the end of lap three - can Harrison hit back in the second half of this race?- Hickman once again bosses it over the mountain and increases his lead to 17s at the end of the fourth lap.- Hicky's crew also slightly quickly in the pitstop as well so he's now pretty much 20s clear of Harrison- Conor over 18s clear of fourth-placed Dunlop- All of a sudden, Hickman's lead is cut by 10 seconds down to 7.9 at Glen Helen on the penultimate lap. Is the leader having problems?NEW LEADER! Harrison now 7.9 seconds clear of Hicky at Ramsey. Conor now reducing the gap to second place.- Harrison increases his lead to 18s at the end of the fifth lap - he's looking good to claim victory in the Senior.- Hickman opts not to pit- By Glen Helen on final lap, Harrison's lead is now over half a minute. Conor is closing in on Hickman - can he snatch second place?- Harrison more than 46s clear of Hickman at Ramsey. Conor only 12.8s behind Hicky and second placeDEAN HARRISON WINS THE 2019 SENIOR TT RACE- Harrison claims victory in the six-lap blue riband Senior TT by a healthy margin of 53s after Hickman's bike suffered problems after the second pitstop- Hicky holds onto second place ahead of Manxman Conor Cummins in third, with Michael Dunlop fourth, James Hillier fifth and Davey Todd an impressive sixth in only his second year at the TT1pm - roads now open again except for the mountain