In this week’s Manx Independent, new wind farms could cause problems for the Steam Packet 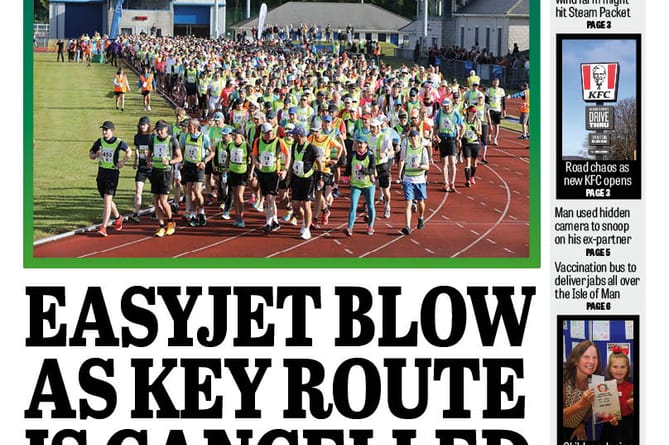 In this week’s Manx Independent we report on a blow for air passengers on page one.

All the Parish Walk finishers.

A special supplement of advertisements for Manx companies designed by children.

Farewell to Tesco’s Neil, a champion for Manx meat

A new consultation on planned changes for TT 2023.

A neighbour of the new KFC restaurant believes road chaos will continue in the area.

New wind farms in the Irish Sea could cause problems for the Steam Packet.

While petrol prices have hit new highs, the taxman is out of pocket.

The measures in place in schools to mitigate Covid spread during the autumn term.

Nedyalko Ivanov Marinov this week pleaded guilty to harassing his ex-partner after secretly installing a camera in her bedroom.

The latest charity in our series is the Billy Redmayne Memorial Fund.

Reporter Siobhan Fletcher has been to the archaeological dig in Kirk Michael to find out what scientists are looking for.

A mother has been in court for neglecting her child.

Personal trainer Kelly-Ann McCulloch has been sentenced for a £17,000 benefit fraud.

An extension to Peel AFC’s clubhouse is being named after the club’s former goalkeeper Kelvin Dawson who died in March.

Hannah Phillips is the community ranger for the Manx Wildlife Trust. Gemma Nettle talks to her in our monthly Green Life feature.

She also talked to a vegan, Agata Szczepaniuk, who walked to the island from Manchester via Ireland, to drink a smoothie in Douglas.

In the centre pages there’s a picture celebration of the brass bands which played in Castletown over the weekend.

Sport is dominated by the Parish Walk.

But we also report that the Isle of Man will once again be strongly represented at the British National Road Race Championships this week.

There is also plenty of community news, a page of your letters, our puzzles pages, the gig guide and a seven-day television guide.

The Manx Independent is in the shops now.

But you don’t have to go to a shop to buy a copy. Just click here to see how to read a digital edition of the Manx Independent.