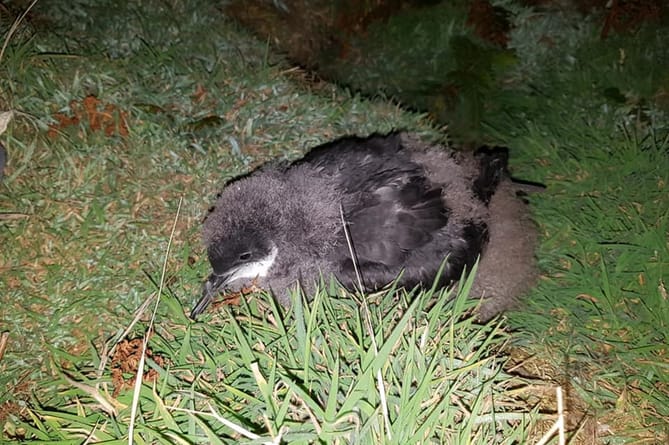 The Manx Wildlife Trust (MWT) has teamed up with Manx National Heritage (MNH) and Manx Telecom to provide a live video feed of Manx shearwater burrows on the Calf of Man.

MNH, who own the Calf of Man, and MWT, who manage the bird observatory there, have been working together for some time to eradicate invasive longtails from the Calf of Man which historically predated on the eggs of birds nesting in burrows.

As a result, Manx shearwater numbers have recently been steadily increasing on the islet. The remote location of the nesting site meant that the power for the cameras and associated equipment must be provided by a solar panel. Furthermore, the video signals have to reach the mainland via a 4G mobile network connection provided free of charge by Manx Telecom.

Two new Manx shearwater nest boxes were installed earlier this year, one of which includes an internal camera, whilst a second camera was installed overlooking the site of the burrows to hopefully capture the birds as they fly in and out. All the cameras use infrared lighting as the sea birds only come into land under cover of darkness.

Unearthing history in the Manx hills

Offender hid cannabis in his sock

MWT’s Assistant Estate Warden on the Calf, Chloe Hurst, has produced a vlog about the Manx shearwaters and their underground burrows on her YouTube Channel, A Wild Guide, which can be viewed here: https://youtu.be/Q5IlGSrcqa4

Graham Makepeace-Warne, engagement manager at MWT said: ‘This was technically very difficult to do and we’re very grateful to Ramsey Crookall for providing the funding for the specialist camera and solar equipment needed to make it work. I’m also thankful to Mike Howland, one of our volunteers, whose technical advice was invaluable.

‘We’re thrilled to be able to bring people closer to nature in this non-invasive way and hopefully give an insight into the lives of these charismatic birds. Fingers crossed we get some nesting soon.’

Ramsey Crookall chief executive Joanna Crookall said: ‘We are delighted to provide financial support to this worthy initiative. We hope that the live cameras will significantly assist the Manx Wildlife Trust in their work to increase Manx Shearwater numbers and bring heightened awareness to this remarkable and charismatic bird that can live for more than 50 years.’

Manx Telecom’s Gary Lamb said: ‘We are delighted that our 4G mobile technology is able to help with this project and broadcast the live feed from the Manx shearwater nesting boxes.

‘Not only will this help MWT better understand the health of the Manx shearwater population but will give everyone the opportunity to glimpse any chicks being reared in the nesting boxes without any disruption to the birds or their habitat at such an important time.’

The live streams can be viewed now and for the rest of the summer nesting season at https://www.mwt.im/webcams