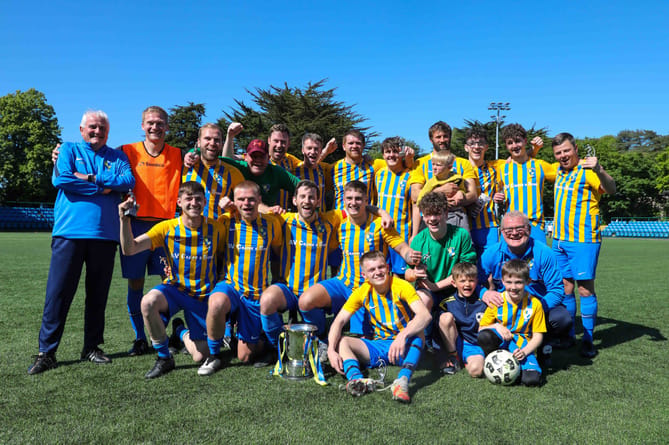 Then came the game’s big talking point when Liam Harrison flicked the ball beyond Foxdale defender Jack Smith who was adjudged to have handled and a penalty was awarded by referee Matty Shaw.

Up stepped Leece from 12 yards but Andy Ball flung himself to his right and clawed the ball away superbly to deny him, only for the linesman to spot an encroachment by the keeper and a retake was ordered.

Remarkably though, the outcome was exactly the same as Leece’s effort was again repelled by Ball in the same corner of the goal to keep the score goalless.

Football: Saints and northerners lead the way in Team of the Week

Under-18s football league season kicks off at the Bowl

Buoyed by that double save, Foxdale very nearly took the lead on the stroke of half-time when a cross was only half-cleared as far as Charmer but his goal-bound effort was hacked off the line by the impressive Leo Tregurtha.

The latter then had a decisive say at the other end of the pitch early in the second half when his corner was half-cleared to Leece outside the area and the Saints No.7 drilled a low, left-footed shot through a crowd of players and beyond Ball into the net to give his side the lead, despite Foxdale appealing for handball in the build-up.

The same two players combined again minutes later when Leece burst down the right wing and crossed to Tregurtha but the full-back’s effort was saved by the keeper, before a long-range effort from Liam Sayle sailed harmlessly wide.

With 15 minutes of normal time remaining, Foxdale created a glorious opportunity to level matters when Charmer crossed to Charlie Harrison who was able to poke the ball beyond Thomas, only for his effort to bounce back off the woodwork and the Saints survived.

While the chance may have gone begging, it was the catalyst for Foxdale’s best spell of the game as they increased the pressure and searched for a way back into the final.

Chatwood then tested Thomas with a low effort which was well dealt with, before Smith’s free-kick nearly crept into the bottom corner but was pushed away by the keeper before Harrison’s rebound was turned around the post as the Billy Goat Park side increased the late pressure on the Saints.

Scott Kermeen was next to try his luck for Foxdale when he stung the palms of Thomas with a fierce drive.

Then, after Saints sub Rudi Bryce had fired over following a Saints counter-attack, Foxdale created one more chance in the dying seconds when Chatwood glanced a header wide when a goal looked certain.

That proved to be the last action of the game as the final whistle soon sounded to confirm a league and cup double for St John’s as the curtain came down on the 2021-22 season.