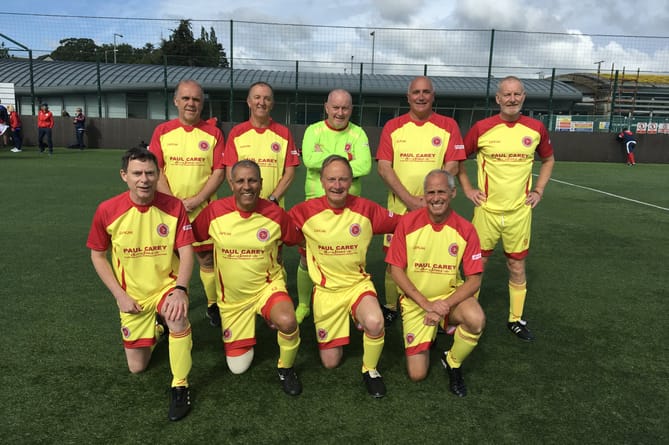 The Isle of Man entered two walking football teams into an international tournament in Dublin over the weekend.

The Manx squad travelled to Ireland to make its competitive debut at the National Sports Campus where they faced their counterparts from England, Ireland and Wales throughout the 4 Nations tournament.

This was the first time any Isle of Man walking football team had played off-island at international level and there were two Manx sides in action in the 50-plus and 60-plus age categories.

Kelly rounds off fine season with Player of the Month award

Corinthians and Peel set to do battle in Junior Cup final

Isle of Man led for most of the game through an excellent Steve Hawke goal squeezed in from a narrow angle.

With only a few minutes to go though, a miss-hit shot deceived keeper Robin Teare to level the score.

A determined defensive display from the Isle of Man held off a very strong Wales team.

But for a brilliant save from the Wales keeper, finger-tipping away a great shot from Craig Hawley, the Manx side could have sneaked another very creditable draw.

A powerful England team threatened to overwhelm a tiring Isle of Man as superior fire power and slick passing produced a three-goal lead.

But Isle of Man heads didn’t drop and, despite losing captain Hugh Duffy to Covid the day before travelling to Dublin, a spirited 60s side completed a superb overall performance.

Abdel Haddouche and Barry Williams contributed despite suffering the after-effects of viral infections. At the age of 70, Dave Power - the senior player in the squad - kept going to the end despite carrying a nagging hip injury.

Liam Thompson and Ian Strodder produced solid defensive performances facing some of the best players in the UK and Ireland, while Graham Cain was plunged into the England game to make his international debut and showed some of his quality.

Team manager Mike Sharpe was full of praise for his players, saying: ‘The opposing nations have player resources in the thousands, where the Isle of Man can only call on a comparatively tiny pool of footballers.

‘It’s a measure of how much we are punching above our weight when you see that in the next leg of the tournament, the players have the belief and the determination even the expectation that next time we can win something.’

The over-50s team went up against strong Ireland, Wales and England teams.

Able to select their teams from vast resources including players from clubs such as Manchester City, Brighton and Hove Albion, Preston North End, Norwich City, Crystal Palace and Nottingham Forest, they can produce high-quality, experienced teams.

Nevertheless, the Isle of Man players produced spirited performances and sometimes showed flashes of their quality. Commiserations go to George Ready for missing out after testing positive for Covid the day before flying out to win his international cap.

Sharpe commented: ‘This tournament was a big step up for Isle of Man, a massive challenge as they came up against the cream of walking footballers. Our preparations for the next leg in September begin shortly - we are determined to do better next time.’